With 18,000 conference attendees and a live-stream around the world, the “growing demand for this event really demonstrates that we have started a movement” said the host. “Individually, we are powerful; together we are unstoppable… You are part of a movement. And together we are changing the world.”

She was followed by Dr. Fei-Fei Li of Stanford University and Google Cloud who spoke about the Deeply Human Side of Artificial Intelligence claiming, “There’s nothing ‘artificial’ about artificial intelligence.” She discussed how it took Mother Nature 540 million years to develop our highly advanced visualization capabilities. Her goal was to teach computers to “see” the rich and beautiful world that we see which is controlled entirely by tiny neurons! 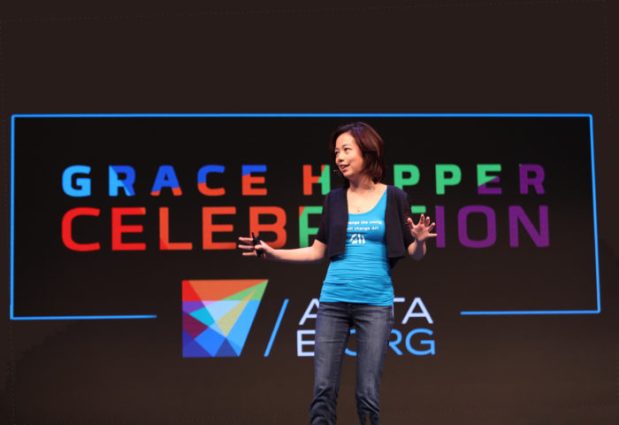 As she told her story of studying physics at Princeton by day and running a dry cleaners business on nights and weekends so that she could afford to go to school, she declared that Machine values are Human values. “AI is only a tool in the hands of people.” She discussed the potentials of the technology to disrupt the job and labor markets and even their potential to use the technology as a weapon.

“I don’t pretend that I have all the answers,” says Dr. Li. “The technology must be guided by our values as much as our ingenuity.” She hopes to see AI used to the benefit of all people not just a privileged few, but it should not just benefit all of us. It also needs to reflect us all as well.

Unfortunately, as we all know, diversity is sorely lacking in the field of technology. To combat this, Dr. Li started #AI4ALL, a non-protfit organization focused on education the next generation of AI Technologists, Thinkers, and Leaders, specifically targeting high school students of all walks of life especially those in lower income areas. “No technology is more reflective of its designers that AI technology. It is our responsibility to ensure everyone can play a role.”

Following Dr. Li was the Winner of the Technical Leadership ABIE Award (the ABIE highest honor), Diane Greene, Head of Google Cloud and Board Member of Alphabet. Throughout her Bachelors and two Masters Degrees, Greene only had one female professor. “In order for more girls to be interested in technology, we need to begin early,” says Greene. “place them in situation where they become aware of their own strength.”

She closed her speech with, “Look around at the thousands of people and know: The world is going to bet better because of you.”

The next notable speaker of the event for me was Dr. Sue Black, the winner of the ABIE Award for Social Impact. She can only be defined as determination with joy and pleasure. She spoke about how it took her waking up to her ex-husband shouting that he was going to kill her and her 3 children for her to start over. “It took me 7 years to get my PhD, but I got it!” she said excitedly to and huge round of applause. And by the time she had finished her degree, she was faculty at the University also. This news also brought her a huge round of applause. 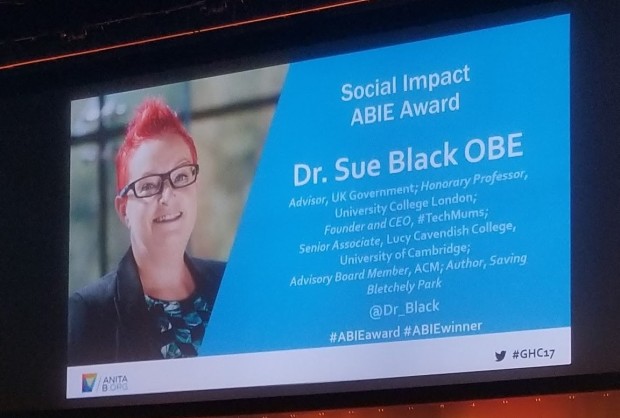 “Thanks again, I’m really enjoying this!” she said grinning from ear to ear and the amazingly positive reactions of the audience.

After a 25 year career in technology, Black feels, “I love technology and I wanted everyone else to love it, too!” And she is currently using her company #TechMums to help over 500 moms in the UK. “The best was to affect kids’ life chances is to work with the moms!

“25 years ago, I was afraid to talk to more than one person at a time. I left school and home at 16 and was living in an abusive marriage with 3 small children. Somehow I found a way to turn my life around. Inspired by my children and wanting to build a better life for them, I built a better life for myself.”

Her inspiring story truly touched me and her closing remarks were especially powerful as well. “Surround yourself with people who support you and don’t ever listen to the haters,” she laughed. “Lots of love, best wishes, and remember, if you do nothing unexpected, nothing unexpected happens, and who wants a life like that?”

The last notable speaker of my morning was, of course, the one and only Melinda Gates. I couldn’t have been more excited to attend this speech. She told a beautiful story of her first love and how they took their relationship slowly, but poked fun at her famous husband stating, “It’s not Bill’s favorite story because the object of my affections was an Apple 3 computer.”

Gates speech was surprising down to Earth. She mentioned and showed a slide of a sticky note she still had from her mom where Microsoft had called with an offer. But she also said, “If you are going to dream big, you’re going to have some spectacular failures,” citing her own spectacular failure of Microsoft Bob. She talked about how at the presentation, she wore a shirt with a target on her back to acknowledge the stressful situation she found herself in. She also owned to that fact that only one part of the Microsoft Bob project lived on, the designer’s mortal enemy: Comic Sans. It was one of those moments where, if Melinda Gates (THE MELINDA GATES) can own up to being on the team that created Comic Sans, none of my failures thus far seemed to feel like they were that bad.

“When we were imaging a future of online magazine [and more], we assumed more women were going to be building it,” says Gates. Since the time when she was at Microsoft, the percentage of women in tech has gone down. “Newsflash: There’s a bug in the system!”

My favorite part of her speech was when she spoke about how the narrative of women in tech needs to change. “It’s hard to women in tech; so fewer women join the field, and then it’s even harder because there are fewer women, but we are now reaching its recursive end.” We need to stop seeing the industry as a “sea of old white dudes” for which she used her husband face across the entire screen to demonstrate. We need to end the idea of “brogrammers” in hoodies.

“For anyone and everyone who has talent an interest, there should be a way into tech. That’s how we will turn this trickle into a torrent.” This will create a WAVE OF TALENT. And we can lead the way. She called everyone in the room to act. If everyone here committed to helping just ten women go into or stay in tech, we can touch the lives of 120,000 women. “That’s more than the total number of CS grads next semester!”

After Melinda Gates speech, there was a flood of people who had to scurry to other sessions across the conference. I was among them as I traveled to Bloomberg’s presentation of “Find Your Inner Tech Talk in 60 Minutes” which you can read about my experience here.

After that, I spent the day just sort of wandering an meeting people. On my way to another session, I ran into Renana Yacobi, a Microsoft Engineer who has given an awesome talk at ABI.NYC’s Innovation Summit earlier this year. At that event, I did not have the opportunity to speak with her as much as I would have liked. It was really great to get to speak with her at this event and to get to know here a little better!

After meeting me and one of my best friends, Lizzie Molloy, she saw that we are an awesome pair and encouraged us to start our own company. It was something we had never considered. But we realized in the discussion that we fall under a special type of partnership where we are similar enough to get along fantastically and different enough to help each other in our weaknesses. We have already started the type of network we hoped to help others tap into. It was probably the best confirmation of our success thus far and an especially amazing experience.

Lastly, we briefly attended the career fair. Mostly in attempt to collect the ever-coveted conference “swag.” Instead we fell into amazing conversations with people we would have never anticipated. We learned that Facebook is probably the only company that doesn’t check out your Facebook profile when deciding if they want to hire you. Zynga offered a secret prize for wearing their breast cancer awareness shoelaces the next day (which I am currently doing!). Cisco was having a Cisco Disco party and gave out monogrammed notebooks with an especially inspiring message in the front (see image below). 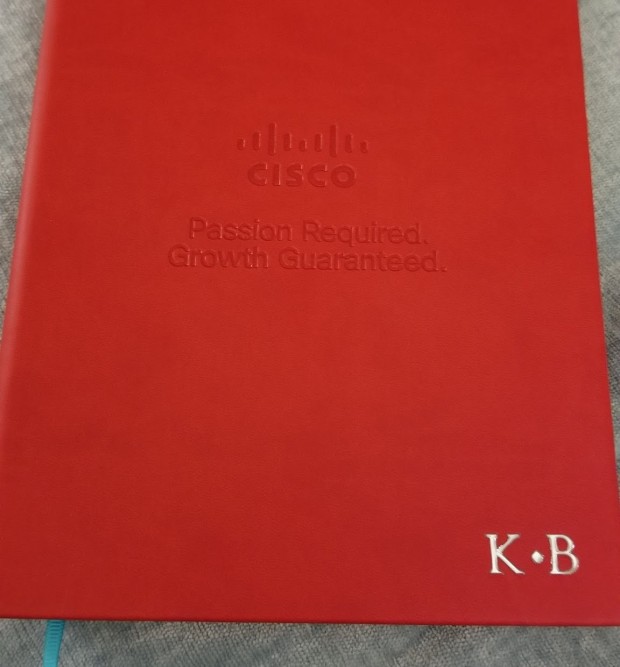 By the end of the day, we were exhausted. But we still attended the Amazon party at Wonder Works. We had a great time playing around in the science museum. I had a great time speaking with Claire Wesselhoeft and Sharon Jimenez Meyers from Amazon. Both encouraged me to apply (which is, of course, their job). Company culture matters. Having employees that genuinely love their jobs as much as these women do were big factors for me. Their summer internship program sounds perfect for me and I’m definitely going to make efforts to apply.

All in all, the first day was amazing and an inspiring start to what I hope will be a great event. Looking forward to the rest of the conference!

This site uses Akismet to reduce spam. Learn how your comment data is processed.